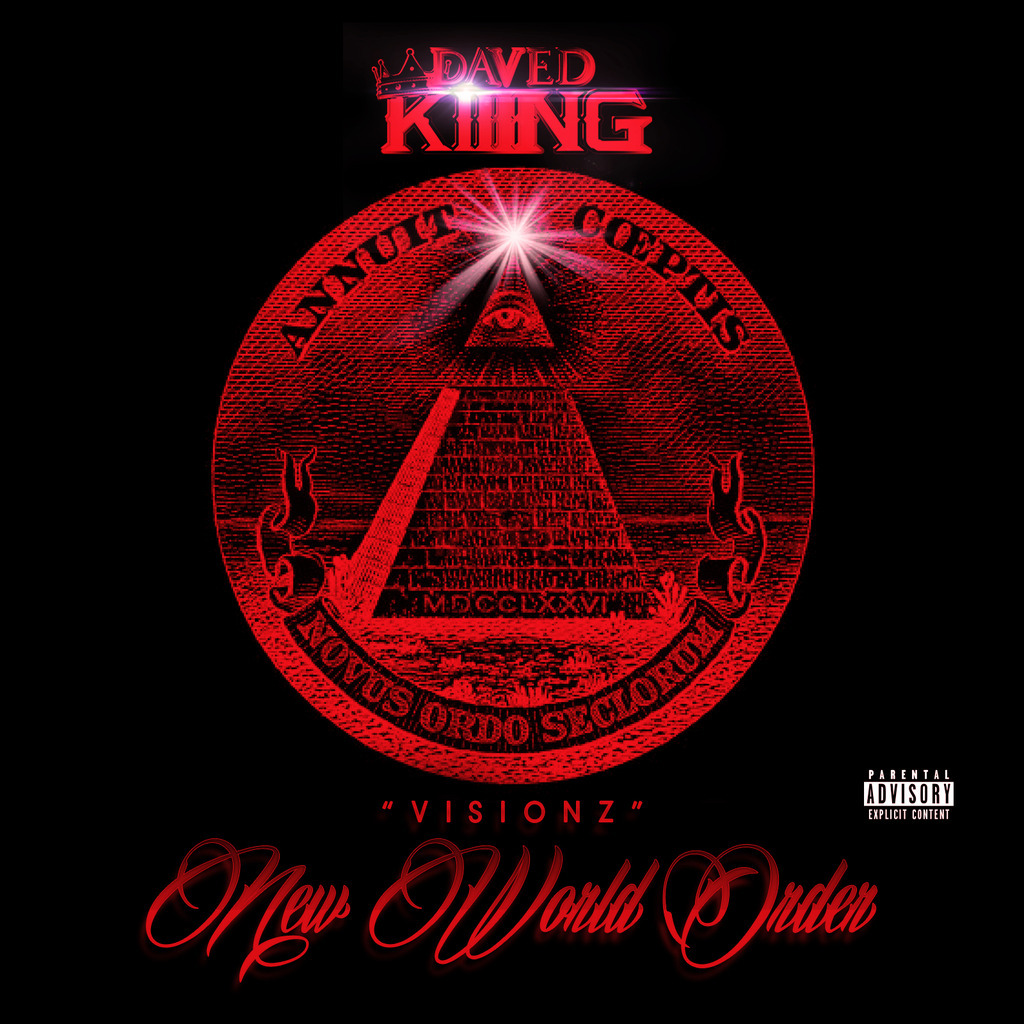 Daved Kiiing’s new single New World Order (Visionz) is a conscious type of political foreshadowing of our world and what things may be soon to come.  The song is crafted to sound like a conversation. Kiiing did this as a way of sparking the audience’s thought process; a way to get people to think, and visualize the word play and lyrics in the song.

BREAKAWAY DAILY: Can you talk about your new song and video, New World Order (Visionz)?

DAVED KIIING: It is my take on the New World Order enigma, which is this much talked about idea that the general masses knows so little about. It has been referenced over and over by George H.W. Bush, Henry Kissinger, Bill Clinton, Joe Biden and President Obama, to name a few.

Kiiing’s music video for New World Order (Visionz) has already pulled in over fourteen thousand worldwide views in only a few months.

BREAKAWAY DAILY: What inspired you to write this song and create a powerful video for it?

DAVED KIIING: The inspiration came from reading Ralph Epperson’s New World Order as well as William Cooper’s Behold A Pale Horse, which was published in 1989, but I read it a short time after 9/11 in 2001. In his book he went into detail about the vision of the New World Order, the world under one rule of law, one central power and one government. It detailed how there will be a police state, numerous executive orders signed giving this new government, endless authority, gun control, warrantless arrest, domestic spying, and proxy wars one after another. Terrorism will be an everyday occurrence pushing the public to cry for security and safety, while giving up their liberties. Pretty much everything we are seeing now. He referred to it as the New World Order, a phrase that he took from George H.W. Bush who had used the phrase in his address to the country on 9/11 in 1991. Imagine that.

What do you hope people take away from your song and video?

Your name is spelled Kiiing with three “i’s,” is that a reference to the third eye?

DAVED KIIING: Yes, it is (laughing) I’m glad you caught that! I guess i’m not the only one thinking deep.

BREAKAWAY DAILY: That symbolism can have so many interpretations and meanings. What does the third eye represent to you?

DAVED KIIING: Wisdom, knowledge, awareness, heightened spirituality… I associate it with power, clairvoyance and the ability to see things beyond ordinary perception. It’s why I wanted to include the three I’s in my name. I know everyone won’t understand why there’s three I’s in my name, but for those that do, like yourself, they’ll know what to expect from me and my music.

What do you suggest people should do to stay conscious and alert to what is happening in the world right now?

DAVED KIIING: First, I would recommend that they research Operation Northwoods, then Operation Mockingbird. Next, I would ask them to look at everything reported on mainstream and corporate media with a discerning mind. And to believe only half of what they see, and none of what they hear (laughs). Finally, I would suggest them to turn towards independent,and alternative outlets for information (such as Breakaway Daily) as they aren’t owned by people with a vested interest.

Do you believe in all the conspiracy theories about the New World Order, the Illuminati, etc?

DAVED KIIING: Honestly I’ve read so much about these groups. Some stuff is way too bizarre to believe (laughs), but then again, we are living in strange times right? If I can provide evidence or links to things we call conspiracy theories, would they still be conspiracy theories? It is funny because these days the term conspiracy theory is used to put a label on people that think outside the box. I believe there are groups and think tanks tied together, all working for their own interests and gain, and these people are loosely called “the Illuminati.“

BREAKAWAY DAILY: The all seeing eye symbol is represented on your single’s album art, can you elaborate on that imagery.

DAVED KIIING: Yes, the people whom we loosely call The Illuminati  are usually tied to the New World Order conspiracy, the one world government conspiracy, the total control of the planet and its money, natural resources, etc. So I felt it was the best image for my single. You see a

blackened background, with a bloody red sky, bloody red pyramid and bloody red eye illuminating over the pyramid. The all seeing eye represents the pineal gland in some cultures. In ancient Egyptian culture it represents Horus, the Egyptian God that was used as a symbol to represent protection from the gods and also royal power. Isn’t it interesting how  a representation of the great pyramid with the all seeing eye of Egypt (Horus) was chosen to be placed on the American dollar?

BREAKAWAY DAILY: Conspiracy theorists have said that The Illuminati (and/or a secret society) are especially controlling the music industry. Do you think that could be possible

DAVED KIIING: Yes, I do believe it is possible to have a  fraternity or crew of people running the show.

BREAKAWAY DAILY: Nowadays there seems to be only certain artists that are getting any airplay, certain messages that we seem to be seeing over and over again, certain symbolism (hands around celebrities eyes, pyramids), etc.

I know right? And it is blatantly obvious! These artist don’t hide it at all. There is so much symbology in the videos; they’ll cover one eye, make a pyramid with their hands over one of their eyes, wear clothing with the all seeing eye on it. They are doing this for a reason. It represents something with the music. We hear certain messages over and over on mainstream radio, particularly hip hop, rap, and urban stations. They do this cycling of songs; sex, drugs, violence. This narcissistic, egotistical stuff. The whole me-ism thing,.and I get it, it’s entertainment, but music of all genres has a power to it. It can influence an individual especially the younger audiences. Can we blame the music for the destructive behavior in young people? Not entirely, but I’m sure there’s a link. Of all the songs to be selected and get airplay, they choose the ones that don’t uplift people, or encourage people to make something positive out of their lives. They may promote one song a year that is conscious out of a hundred that are destructive, but this is a whole other discussion.

Image: All Celebs Are Illuminati

BREAKAWAY DAILY: Do you follow a lot of the blogs, channels dedicated to these types of conspiracy theories?

I do keep up with a few sites, but I’ll suggest to anyone if you want to read into these types of subjects you’ll need the gift of discernment, you’ll need an open mind. Of course you can’t believe everything you hear or read or see, but you should view every bit of information with a broadened perspective.

Nothing beats human feelings and intuitions