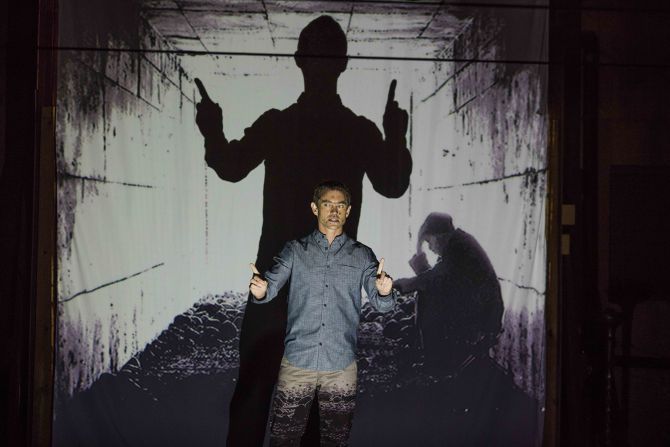 Hugh Dancy wants us to drink the Kool-Aid. And Aaron Paul just needs a hug.

Hulu’s new ten episode “cult” drama The Path looks at darkness that can be found in enlightenment. It is executive produced by Friday Night Lights’ Jason Katims and Jessica Goldberg. The series explores the communal lives and faith of the committed Meyerists; a fictional religion.

The series begins with Cal and a team of Meyerists helping a town after a tornado hits. Mary Cox (Shameless’s Emma Greenwell) is an addict who’s been saved by Cal and is now freed from a life of abuse. She becomes infatuated with Cal and decides to devote herself entirely to The Movement AKA Meyerism.

Eddie, on the other hand, is starting to have what he as come to accept as truth become challenged.

Hawk, Eddie and Sarah’s devoted fifty year old son (that is a dead ringer for a young Heath Ledger), wants nothing more than to drop out of high school and join The Movement full time. His plan and ideals are then altered when a popular classmate reaches out to him for help.

“You must believe to belong” is one of the taglines of the show. But it is hard to get behind what the show wants us to believe due to that belief system the characters are battling over being so vague. But I suppose that could also be intentional, since so many religions are also ambiguous.

In the current TV landscape, where the competition is steep and there are more TV paths than ever to follow, new shows have to offer us something we haven’t seen before. Although The Path features intriguing subject matter and a talented ensemble cast, it can sometimes feel like you’re stuck on the compound too. Maybe that’s the point.

Does it capture your interest enough to make you want to stick around and keep following The Path?