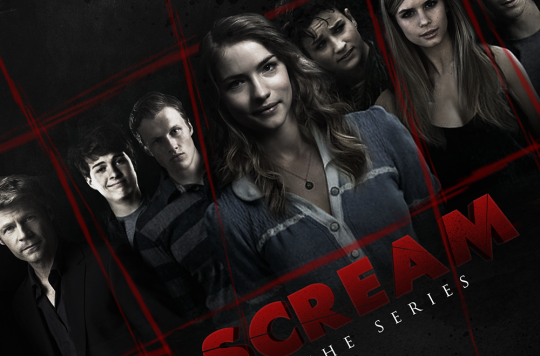 As a massive fan of the Scream franchise I was ecstatic when I heard they were going to be bringing the film to the small screen. After watching the pilot though, I can’t say MTV killed it just yet…

To me, this Scream resembled more Friday the 13th with all the lake stuff, the urban legend, the ugly mask, etc. A lot of the quintessential classic lines from the films just aren’t there like “What’s your favorite scary movie.”

The show was adapted for the small screen by longtime TV veteran (but horror newbie) Jill Blotevogle. Wes Craven, the original writer-director, was in talks to direct the pilot, but unfortunately it didn’t pan out. However, he is the executive producer.

A new adaptation had the potential to breathe new life into the 90′s classic and be even scarier with all of the stalking technology out there today.. Don’t forget when Scream was released portable landline phones were the biggest thing going…

But the TV show suffers a bit in terms of quality, acting, and dialogue. The first major scene meant to evoke the classic opening of the original Scream also fell short. I didn’t love Bella Throne’s character Nina as the series opener, even though I like Bella as an actress and wish she had been a regular on the series. This opening scene is such a vital part of the series, because it is suppose to get you on the edge of your seat – ready for a wild ride.

In the original, this type of character (the popular girl) was played by Drew Barrymore. Her character was sweeter, and more innocent though. She was just minding her own business, putting on some popcorn and going to watch “Michael Meyers stalk some baby sitters” in Halloween…when all hell breaks loose!

This series made the scene more comical, then scary. But that seems to be what this series is trying to be, more like the Scary Movie franchise – a fun parody. And that’s fine. The show is also less horror at times and more teen drama mode, only with less interesting characters.

Also vital to the Scream films is the necessity of bringing up popular culture and other slasher films. Luckily this is one of the most enjoyable things about the TV series. They are also able to reference TV horror shows since there are so many out there now. But not once did anyone watch a horror movie or horror show, or quote a line from it. This was always done in the films, it is key.

I am glad they made this show as it will introduce the films to a bigger audience, but it isn’t really doing those films any justice. A show like this didn’t need to be Scream, since it has cut so many ties from it to be a standalone entity (which is also a good thing.) All they really seem to be doing is using the Scream name…and butchering it at that.

The Kansas City Star review of Scream says “The TV version of Scream has so much fun gutting its origin story for inspiration, it almost forgets to be scary.”

Noah (or shall I say Randy) the requisite Scream horror movie buff of the Scream TV series put it best, “Slasher movies burn bright and fast… TV needs to stretch things out.” This is why, Noah says, “You can’t do a slasher movie as a TV series.” Should MTV have taken Noah’s advice? Noah later explains how the show is going to get around this. It is going to get us to really know the characters and care about them. “You root for them. You love them,” he explains. “So when they’re brutally murdered, it hurts.”

Should you watch this show? If you really love Scream like I do, go for it. But if you miss it, it’s not going to kill you.