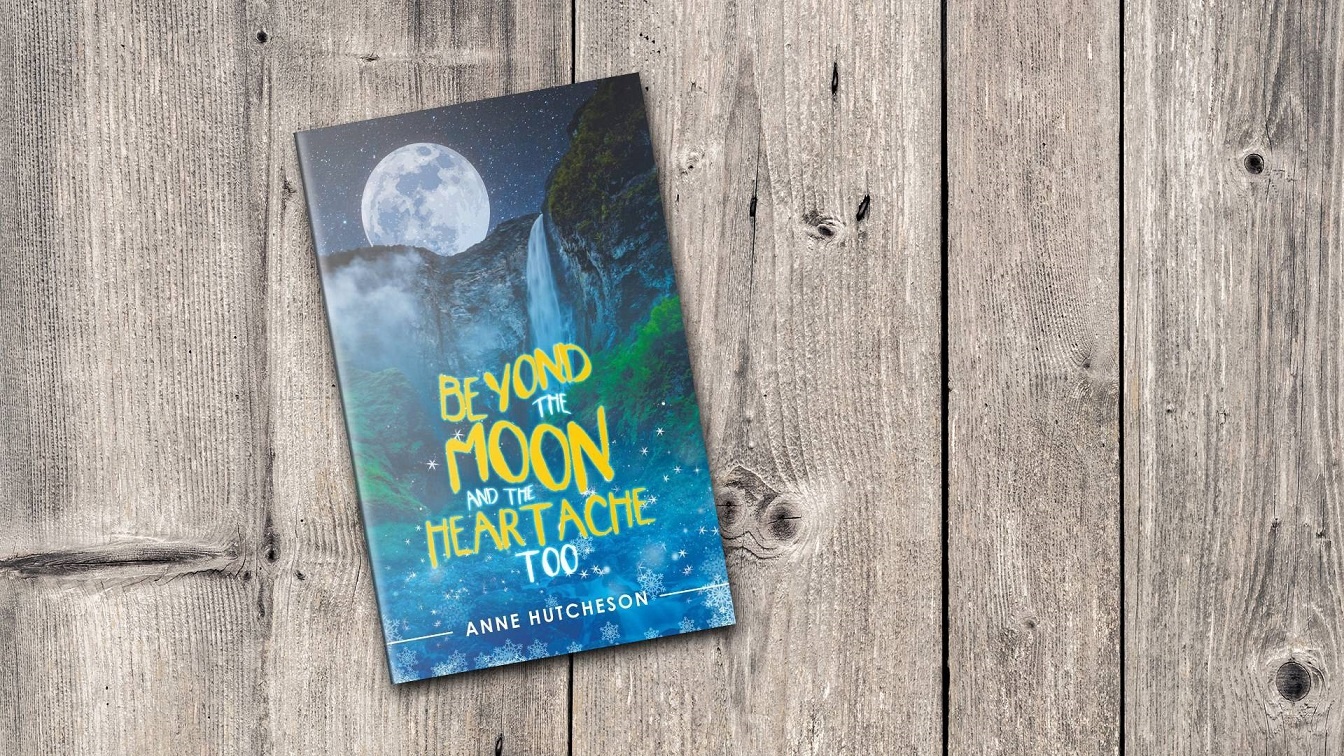 There are a lot of untold stories out there, and if we stop and listen to people, you’ll find even those around us have struggled in unique ways. Anne Hutcheson writes stories that focus on human depth, dysfunction and the complexities of relationships whether it is about abuse, surviving tragic circumstances or coping with disease. She writes stories that she hopes open pathways to communication between one another. Tackling the personal demons so many face, told in story, is a great way to surface issues that are often swept beneath the carpet.

My novels are all about real life demons, those things that happen and are difficult to talk about because they can be scary or could maybe rock the system.

Each of Anne’s books is meant to be read, so that an honest discussion can be started with issues previously not talked about. For Beyond the Moon and the Heartache Too, the topic is timely. The sooner elder abuse is more openly discussed, the sooner the issues surrounding it can be addressed. Start looking around you with a sharpened awareness. Check on your elderly neighbors and friends. Listen carefully to what others are telling you. Be kind to all.

The actual makeup of the players involved is the real story that needs to be better understood. The plot was simple, take all you could including the parents’ souls.

How did you begin on the journey of writing a book on this important issue of elder abuse?

Initially, my friends’ stories about their families got me to research the topic of elder abuse. I discovered one sad story after another with little, if anything, that could be done, and death all too common. It began as what I considered tales from my friends which I found hard to believe. I mean how could someone treat their parents like that? So, I did a little research related to the issues being described. I quickly learned these tales were indeed frighteningly true. I also realized the issues had a lot to do with how individuals were raised themselves, their place in the birth order, their gender, and how involved anyone really wanted to become.

How did growing up in the fifties and sixties shape your writing?

I was born and raised in Colorado, primarily in the Denver area. The fifties, and most especially the sixties, were interesting decades in which to grow up and shape my writing. There were enormous freedoms to be taken when no one was paying attention, which was often. I protested the Vietnam War passionately during high school, studied languages, and the fine art of being a young lady when it was necessary. Marrying my high school sweetheart right out of high school further opened my freedoms and my eyes. I literally lived the maxim, “make love, not war,” during the late sixties as my husband and I began our family.  My husband attended classes while I continued to protest, raise two precocious children, and run our little household on a shoestring budget. When I finally made it to college, I majored in secondary education and broad field social studies, leading me into a career I loved. I taught American history, American government, and an occasional English class. I moved into special education, then gifted education, and ultimately studied educational leadership taking me to high school administration. All the people we have met inspire the creation of many of the characters in my books.

Were there days when you had to take a break from the research?

Yes, because it was deeply disturbing. I knew a little about abuse occurring in nursing homes. I was soon to learn that abuse by family members in private homes was increasingly common, and uncommonly cruel. People hesitated to talk about it, finding it embarrassing that their sister, their brother, their aunt, or their uncle had turned into villains they no longer recognized. When seeking help, they found one door after another slammed in their faces. Despair and desperation were often close, sordid companions. It was a story that had to be told and must be read.

What did you discover are the characteristics of a typical perpetrator while researching?

I found that the perpetrator was quite often a less successful family member. This person had a minimal income or no income, thus relying on the parents for money, and sadly access to drugs. When it became apparent that claiming to be the caregiver for the parents made it easy for this person to take over and take away the parents’ identity and dignity. Often charming initially, this person could rule the parents and their resources long before suspected of any wrongdoing.

How long did it take you to write?

Did you take anything from personal experience?

My years growing up in a dysfunctional family did serve me well in understanding the underlying dynamics of such a situation.

How would you say this differs or compares to your other novels?

My first three novels are about chronic disease, primarily cancer and heart disease. Based upon over three hundred informal chats where people carefully opened up about their fears, these three novels tell a story all too often hushed regarding an increasingly jaded medical community on the one hand, and a promise of easing discomfort through alternative therapeutic practices like acupuncture and reiki on the other hand. These three novels also tell of the love story between Penney and Jack Divan which endures in spite of all the demons. Likewise, Beyond the Moon and the Heartache Too tells the love story of Sidnei and Logan Jewell who get thrown into the throes of elder abuse, a very different, but nonetheless threatening demon.

How do you come up with your characters?

My husband grew increasingly well known in his field and had business travel opportunities which I began to join. Having traveled extensively throughout the United States and the world, I am always making notes about interesting people I come across. Along the way, I became a sommelier (wine steward) and a reiki master making our trips a little over the top. All this time, the travel bug proved intoxicating, and we now travel the world. The actual names I give characters has a lot to do with the characters themselves. For the Jepson family, I researched the evilest figures in history for this book. I used these historical names, or their more modern derivatives, to design characters who could easily come out of my research. For Sidnei and Logan Jewell, their names share a common meaning of a peaceful place. Federal and state guidelines for identifying elder abuse further rounded out the creation of my characters.

Tell us about the character of Sidnei Jewell.

Sidnei Jewell is successful in spite of her upbringing, now called upon to rescue her parents with whom she had had little communication over her adult years. She found them destitute, ill and out of touch with the world around them. All of this she quickly discovered could be attributed to her younger brother, over indulged growing up, now indulging himself at her parents’ expense. In trying to help her parents, Sidnei uncovers events and secrets of which she was unaware while growing up, or was she? It was the fifties and sixties where lives were not often as they appeared.

Do you have any literacy rituals that you practice?

My one steady ritual is music. Latin, rock, blues, sometimes classical, which fill my writing studio when I am writing.

Have you always been a reader?

My whole life I have read prolifically, and my children read extensively to this day. Read and the whole world opens for you.

My current research and writing are focused on the survivors left behind after a suicide, a very private demon.

Any advice for aspiring writers and authors?

Writers, you know who you are. Just write! Just sit down and write! Write because you have something to say, and say it now. You are going to learn a whole lot about yourself in the process. Life will start popping all around you, so please share as you learn to pay closer attention to life.

For more information on Anne Hutcheson visit her official website. Beyond The Moon and the Heartache Too is available via Amazon and Barnes & Noble.

Gabriella Eva Nagy’s books are both visually stimulating and educational, reflecting values that are eternal