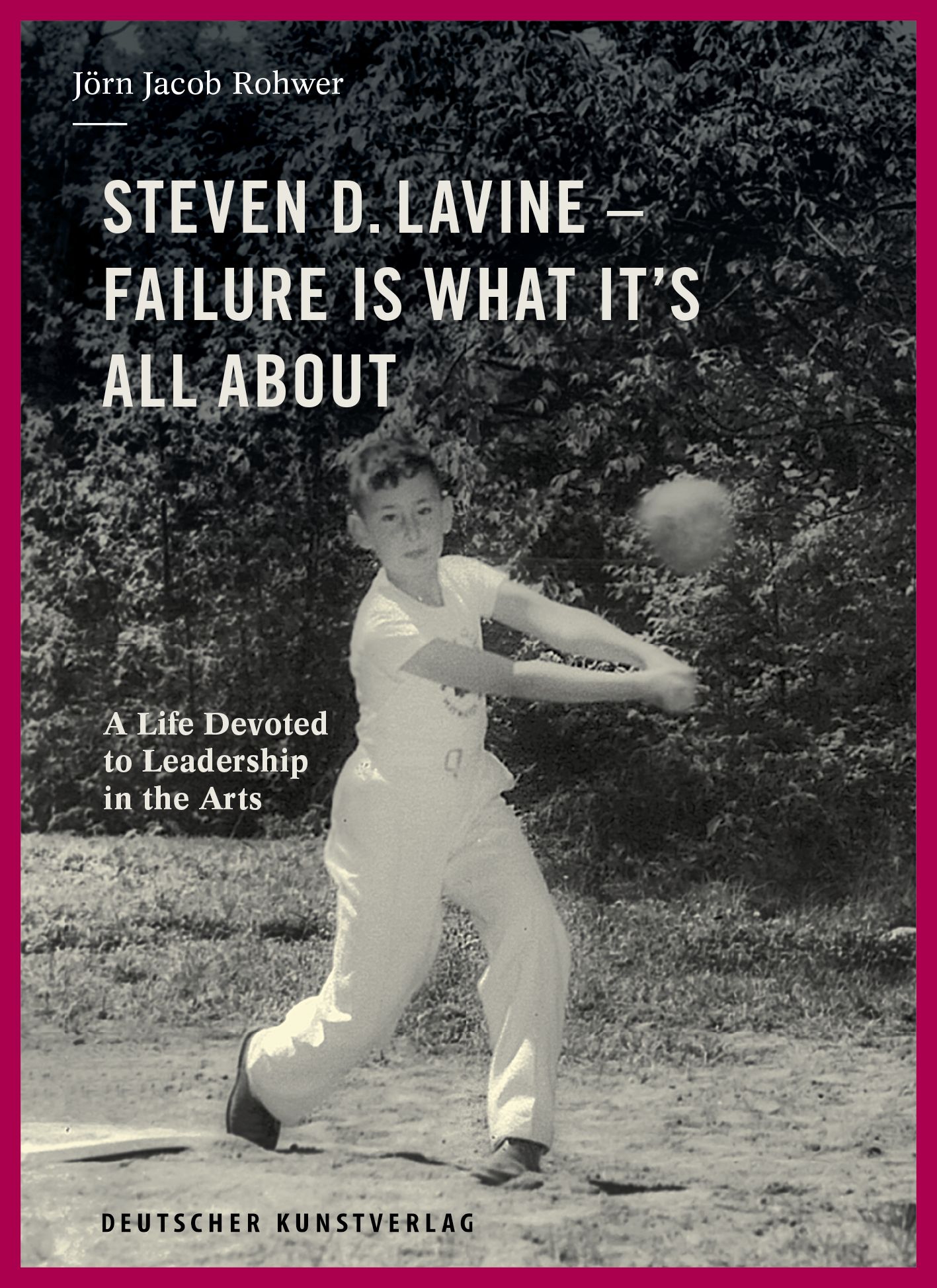 In Steven D. Lavine — Failure is What It’s All About, award-winning German author and journalist Jörn Jacob Rohwer explores the story of the California Institute of the Arts and its legendary twenty-nine year president Dr. Steven D. Lavine.

“From 1988 until 2017, I served as President of the California Institute of the Arts (CalArts). During this time, CalArts distinguished itself as a progressive and internationally influential leader in each of the arts taught at the college—art, dance, theater, music, film/video, and writing—and became a pace-setter in domestic diversity, community engagement, international linkage, and in the production and presentation of cutting edge professional work.”

Failure Is What It’s All About traces the historical and biographical influences that shaped Steven D. Lavine’s ideas about the arts and education, as well as the development of his leadership style based on listening, learning and consensus-building. The book presents a brief history of the California Institute of the Arts, in which Walt Disney’s vision for an art school located before the gates of Los Angeles became a reality.

How did this project come about and how did Jörn Jacob Rohwer end up being your biographer?

My wife was my partner in everything we accomplished at CalArts. She felt there should be a record of these years, which added up to more than half the college’s life and set a high standard in the education of artists. Janet knew Joern Jacob Rohwer, a writer much admired in Germany for rich accounts of the lives of leading artists and cultural leaders. Since he had written a deeply insightful essay for an exhibition of her photographs in Berlin Joern agreed to take on the project. He wrote it as a way of thinking about a figure who did not emphasize his own prominence, but instead devoted himself to advancing the lives of others.

Tell us more about the Beckett-inspired title Failure is What It’s All About and your philosophy in life.

My mother was a gifted pianist who had neither the self-confidence nor the financial means to pursue the performing career to which she aspired. As a result, she was perpetually dispirited. I grew up feeling that it was my responsibility to cheer her up, a mission at which I failed. As a result, I often felt that I was not good enough and likely to fail. I feared I would end up defeated and sunk in depression like my mother. This fear of failure fed my leadership style and my passion for CalArts students to be educated to accept failure as a necessary step in producing genuinely original and important art.

How do you think failure is important in helping us all grow?

Failure is an integral part of any creative person’s life. In many ways, it is what drives a person on from one work to the next, in pursuit of fully actualizing one’s vision. Beethoven’s notebooks show that he could spend a decade revising and revising a theme for one of his symphonies until he arrived at a version that sounded inevitable. Picasso and Braque made painting after painting on their way to cubism and then beyond cubism. At CalArts, we tried to teach students that failure is part of the process. Unless you are experiencing failures, you are probably not pushing yourself hard enough to get it right. Harder yet is preparing students for being rejected by others and not perceiving that as a failure.

You’re quoted as saying that at CalArts no alumni portraits were hung on the walls because “it was important not to make a fetish of success.” Could you elaborate?

CalArts has a policy of not collecting student and faculty art despite the temptation to show off their work’s brilliance. The walls are reserved for each new class and generation of students. Added to this is that it is far too easy to be intimidated by one’s predecessors’ accomplishments. There is a fine line between learning through a deep appreciation of what has come before you and having to push that art away so that it does not become an obstacle standing between you and what you want to create. Hanging the art of their predecessors on the walls would valorize that work in a way that can be harmful.

Can you name some artists who somehow “failed their way to success”?

My favorite story in this regard is of a founding faculty member at CalArts, John Baldessari. He was hired to teach painting but had decided to burn all his paintings before actually taking up his post. Doing so freed him to pursue the conceptual, frequently photo and text-based work, which made his reputation as a major artist and allowed him to influence a generation of CalArts students who themselves rose to international prominence.

Your wife and life partner is an artist. How has Janet Sternburg’s work influenced your thinking throughout the years?

As a writer, photographer, and phenomenally brilliant human being, Janet strives to be completely open to the full complexity of her personal experience and of what she sees in the world. I, on the other hand, am driven toward large generalizations which are “true enough” to be guides for action but fall short of the full story. Janet continually pushes me toward deeper thought and better courses of action. Add to this that she has great clarity of mind, a quick grasp of the qualities of people she encounters. She has an absolute commitment to honest and ethical behavior, and a great capacity for sharing. You will understand that I am fortunate beyond all measure to have her as my life partner. Very little of what I was able to do at CalArts would have been possible or would have turned out so successfully without her.

What was it like working with Jörn Jacob Rohwer?

Jörn has an extraordinary way of preparing his profiles. He does his research. For example, he found the date of entry of my grandparents into the United States in Ellis Island’s records. He then prepares a framework for an intensive and extensive conversation with his subject. In our case, we spent four to five hours a day for about a month in conversation. From this mass of material (which in my case involved a fair amount of rambling and digression), he finds the through lines that allow him to discover a narrative arc in my development as a person, especially around issues of failure. The book turned out to be a great gift, in which I learned things about myself that I had never known.

Steven D. Lavine — Failure is What It’s All About, a book about CalArts and its legendary president is now available wherever books are sold. For more information visit StevenDLavine.com

Bokyung Byun​ is pushing boundaries as a female guitarist

His style of listening, learning, and conscious building is an amazing learning tool. Teaching students that failure is part of the process, yet at the same time preparing students that being rejected by others, and not perceiving that as a failure. Unfortunately, there have been several times I haven’t felt good enough. But thankfully he fed on his fear, and this fear fed his leadership style to teach students that failure is a necessary step in producing genuinely, originally, important art 🙌💯💞🙏

Steven D. Lavine — Failure is What It's All About Book Publicity Case Study | Coriolis Company