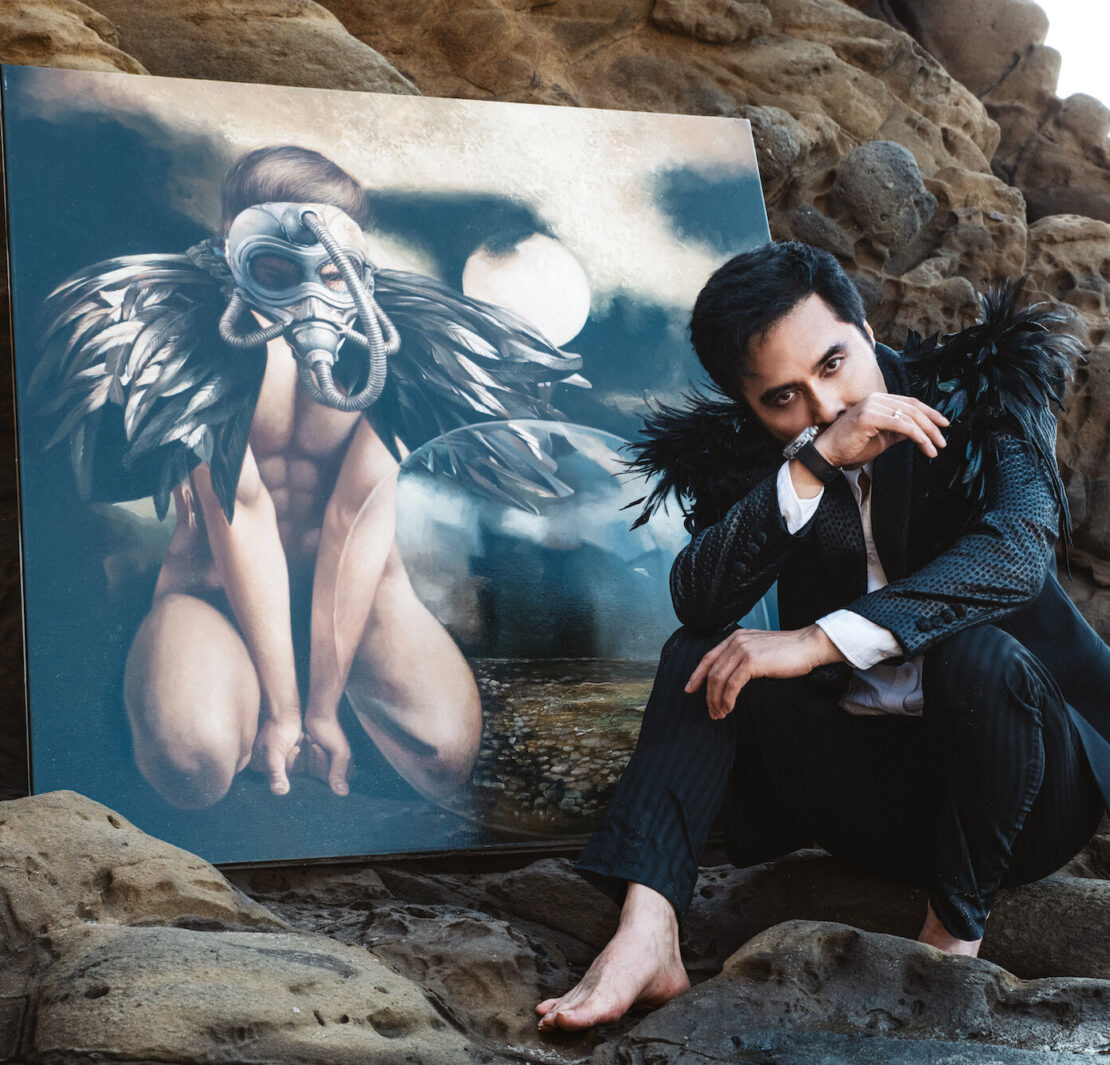 Art is about blurring lines and intermingling theories to make a statement evoking strong emotions and big ideas. Transcendent art is about finding would-be opposites and mixing them like they’re destined to unite. That’s precisely what world-renowned, modern Renaissance artist Sir Daniel Winn is most successful at doing. He exquisitely pushes the boundaries in the realm of art by merging art and science. He blends these dichotomies flawlessly together to create stunning works all in the name of helping people understand our purpose on this planet.

Sir Daniel’s latest awe-inspiring series, Quantum Mechanics, aims to give the viewer a better understanding of universal truth — a translation and metaphor of his concept Existential Surrealism with the philosophical perception of reality merging art, mathematics, emotions and spirituality to share his artistic innermost visions.

Existential Surrealism is an artistic style developed by Sir Daniel which draws on his life experiences as a child refugee of war and the dichotomy between integrating into a strange new country while maintaining a sense of ancestral heritage. Born in Biên Hòa, Vietnam, Sir Daniel and his family lived there until 1975 when they escaped to California during the Fall of Saigon. Visually, his style of expression involves contrasts and counterpoints and uses a surrealistic subject matter to encourage the viewer to examine the nature of our human existence.

“The inspiration came from my Existential Surrealism philosophy. I’m trying to merge the idea of the existence of matter and life and how it’s all basically mathematics.”

It’s no secret that as humans we are always trying to decipher our existence to find the answers to why we exist and even if we exist. Quantum mechanics has always been a mathematical theory that helps us understand that truth is based on mathematics. “In the mathematical field, it’s mostly the intellectual side of things — thinking, numbers, formulas, algorithms. But here, in terms of art, I’m creating two-dimensional and three-dimensional paintings and sculptures to give a visual mathematical language rather than just an empirical formula.”

The way Sir Daniel uses mathematics via visual language to express and share an understanding and concept of universal truth is extensive and impressive. “Mathematicians, physicists and philosophers of the past have calculated the golden ratio, the Fibonacci Sequence, and the quantum mechanics formula.” They were trying to figure out why people gravitate to certain beauty within different anatomical features and proportions. Not just physical bodies, but anything proportionately calculated by the golden ratio. So, even in quantum mechanics the concept is to try and understand more about matter and if it exists on any level.

From The Big Bang theory, we know about the universe’s expansion and that it’s impossible to calculate the enormity. Nor can we comprehend the vastness of the visible and infinite universe. Instead, Sir Daniel demonstrates the opposite extreme by creating art to convey whether the universe even exists or if there is such a thing as the universe. He incorporates calculated mathematical equations of the Fibonacci sequence and the golden ratio to better understand mathematics and his philosophy — that if we do exist, it’s temporary and brief. That is to say, “The bubbles [in my paintings] can burst in an instant. And compared to time and space and matter, which is all relative, it’s all very brief in the bigger picture — including the life of the universe thus far.”

With such grand and intricate philosophies, one has to wonder where this interest in our existence began. It all started for Sir Daniel where most journeys commence, in university. During this time, the mind is a sponge for learning new ideas and grasping new and exciting truths. It’s prime time for a young mind to comprehend different concepts. While originally pursuing a career in reconstructive surgery at the University of California he took an array of subjects in pre-med and medical school such as philosophy, math, physics and art history. These courses opened his mind to learning about theories and conceptual ideas.

“This is where my interest began and my way of trying to communicate how I view the world. I wanted to explore so much about the existence of the universe and the meaning of life. When I gave up my medical profession and left school to pursue a career in art, I wanted to create something that would convey my philosophy.”

Within Quantum Mechanics there is an allusion to the paradox of man’s perception of reality versus the energetic nature of reality. “When I first started, my approach was almost elementary in attracting people’s attention to the beauty of art by using the Fibonacci sequence and the golden ratio. Now that I’ve captured people’s attention and my name has been solidified, I want to go further. Now that people are intrigued and have collected my work, they want more than meets the eye. They want more than just the beauty and the peripheral layer. It’s like an onion. They’ve seen the first layer. They want to peel it back and see what’s next. They want to go deeper. It’s like the analogy of the rabbit hole. How deep do you want to go? How profoundly do you want to understand this? So, here’s an opportunity for one to feel the concept of universal truth through my philosophy.”

Sir Daniel’s brilliant series Timeless Presence explores the quantum mechanics of Existential Surrealism through bronze, stainless steel and lucite sculptures. The series represents the indefinite continuation of existence in the past, present and future, regarded as a whole. There’s a depth to the meaning and purpose that exists within this series. Since the materials are man-made, it goes along with the same symbolism that mathematics is man-made. Instead of using mathematics to understand universal truth, Sir Daniel aimed to create art with materials made by man so that we can have a better understanding of existence. “We are energies of existence in “time” that never cease to exist; like the law of conservation of matter in physics. The mass can neither be created nor destroyed. We temporary lease our current organic vessel until our energy moves to another realm.”

The brilliance and strength of every piece is that each of the works can stand alone as an individual entity, yet they all come together as a whole. Separately, they convey a sense of motion, energy and the expansion of space and time. Put together, it’s like a book about universal truth. “In that book, each chapter stands alone by itself; each is independent of the rest of the chapters. But by the time you read one chapter, you want more. And by the time you read the entire book, you have a better understanding of it all or even possibly the answer to the meaning of life. So, while each is independent, they at the same time are contingent upon understanding the next chapter and so on.” Once the book is finished, it all comes together and the reader better understands life’s meaning.

Sir Daniel’s work explores the physical and spiritual dichotomy of human existence. His newest mathematical oil on canvas series was also influenced and inspired by fashion designer Alexander McQueen. Sir Daniel reiterates that he admired the intensity of McQueen’s designs. “He was, at least superficially, infatuated with death. I’m more infatuated with life.” Since Sir Daniel’s interest lies in the meaning of life, he felt it was the perfect marriage of contrasting inspirations. “Life and death, which I view as universal truth, are just mirror images of each other. Death is non-existent whereas life is current. I felt this was a perfect way to pay tribute to McQueen by utilizing his affinity to create death and merge it into my infatuation with life.”

While Sir Daniel is about fusing philosophies and making us think critically about our existence, he is also a philanthropist with great love for his community and people. In 2018, he was knighted with the honorary title of Sir by Prince Waldemar of Schaumburg-Lippe in recognition of his philanthropic works. “The only true measure of our lives is the positive influence we have in the lives of others and on humanity as a whole.”

Sir Daniel was also recently commissioned by Bruce Lee’s daughter, creator of the Bruce Lee Foundation, to create an award to commemorate actors in Asian martial arts films at the Asian World Film Festival (AWFF). Since the Academy doesn’t hand out an award for actors in Asian films about martial arts, this was a way for those actors to be recognized. Being a colossal fan of Bruce Lee and deeply respecting his martial artistry, Sir Daniel jumped at the chance to make this happen. Bruce Lee is an artist — a martial artist. Like Sir Daniel, Bruce Lee had a profound interest in the philosophy of life. His passion for Gung Fu inspired a desire to delve into the philosophical underpinnings and he even wrote books that would relate doctrine principles to certain martial arts techniques.

“I thought as an Asian-American myself, it was an excellent opportunity to give tribute to a person that I am very intrigued by because of his philosophy of life and belief in meditation. Bruce Lee believes very much about his artistic realm of the Chi, which is energy and a theory or ideology in the spiritual realm. The way that he is able to defy the laws of physics is what really fascinates me. I’m honored to be a part of his legacy.”

Whether it’s Timeless Presence or Quantum Mechanics, there doesn’t seem to be an end to Sir Daniel’s creative mind. It’s clear he set out to create something that would align with his life philosophy. Instead of putting it on paper like philosophers in the past, he’s creating art through two-dimensional and three-dimensional artworks to solidify and pass his logic onto future generations who will have use for his concept of universal truth. He hasn’t just combined art and science; he’s intertwined extreme intelligence and creativity and put it on display for the world to absorb and learn from. “The only true measure of our lives is the positive influence we have in the lives of others and on humanity as a whole.”

[…] is a leader in his field and has created his own artistic style and philosophy, which he calls Existential Surrealism. Using a surrealistic subject matter, his style of expression encourages the viewer to examine the […]