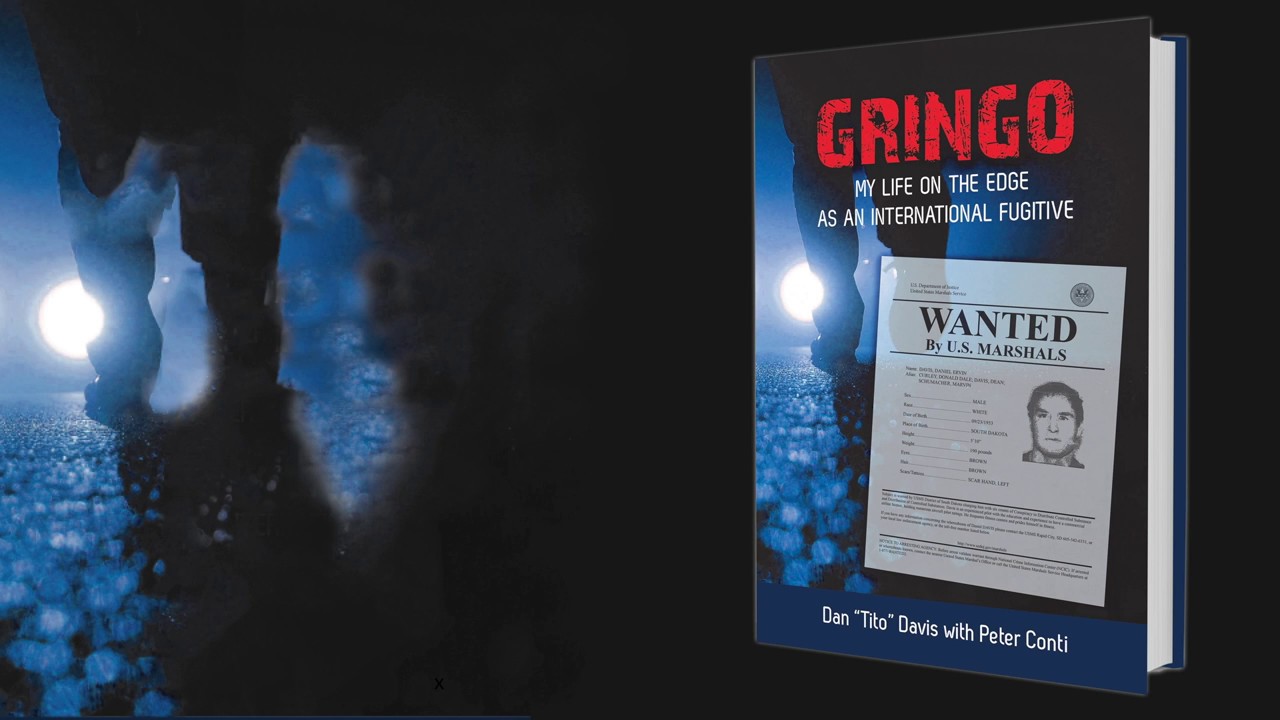 Dan Tito Davis is the author of Gringo: My Life on the Edge as an International Fugitive based on his life story. Davis was a fugitive from US authorities between 1994 and 2007, when he was renditioned back to the US from Venezuela. During his ten year prison sentence, Davis penned a seven hundred page manuscript, which chronicled his thirteen year period on the run from the United States federal government. His writing provided a glimpse into staying alive and out of prison while mixing it up with major drug cartels in Colombia and Mexico; crossing the Darien Gap the worlds most dangerous passageway, sneaking into Germany, getting interrogated in Cuba, and building a resort in Venezuela the same time Hugo Chavez was calling President Bush “the devil” at the United Nations. And while Davis’s exploits were stunning, there was only one problem, he wasn’t a writer. While living in a halfway house in Wyoming, Davis met with writer Peter Conti and quickly tapped him to “write his story the right way.” For a year the two worked diligently to turn Davis’s raw material into an action-packed memoir. 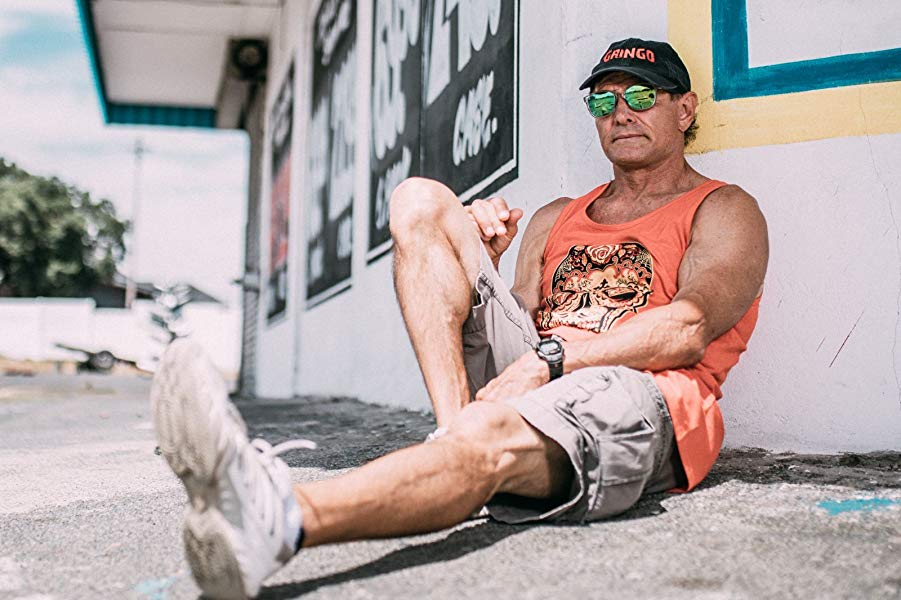 Gringo: My Life on the Edge as an International Fugitive has received rave reviews from critics and readers. Why do you think it has struck a chord with so many people?

Gringo is a story about my life.  I grew up as a Caucasian American kid in a basically typical Midwestern household.   Where I ended up, the path I blazed and the things I did to get there were anything but out of a normal upbringing. Everyone has a story! But mine is even more unique because probably no one has had the experiences that I have had. When the reader listens to my roller coaster life story, I believe they are extremely fascinated, captivated and tuned in.  They tell their friends, family, and associates about Gringo: My Life on the Edge is an International Fugitive, letting them know that they won’t be able to put it down, or turn it off with the release of the audiobook. What do I attribute that to? This book has the material. This book is literally a movie, or a miniseries!!  It has it all! The content and how it is presented has given this book the considerable success it has had.   Too many people, including reviewers and critics, have been saying that this book is what movies are made of. That is why it is going to the next level, which is either a mini-series or major production movie.

Besides yourself, who is your favorite character?

Juilo, The Medellin Columbia cartel boss who picked me up in Mexico, took me to Medellin and put me under his direct protection, is my favorite character.   This guy went way out of his way to protect me, looked out for me and after me. He really took care of me. Julio explained to me how things worked in Columbia at that time.  What I could do, what I couldn’t do, where I could go, where I couldn’t go, and who I could associate with or talk to. He explained the rules of survival to me in the most dangerous place on the planet at that time.

Columbia was a war zone then, there were no tourists, there were no Americans, and even the DEA had removed most of their agents!   I was a pursued international fugitive wanted by Interpol and various other agencies with three letter acronyms. They had issued wanted posters and descriptions on their Web Sites. Things weren’t going to end well!!  Without him I would have been apprehended, kidnapped, dead or probably all of the above. Julio was a very unique character, I literally owe him my life, and I sincerely hope he is still alive today. 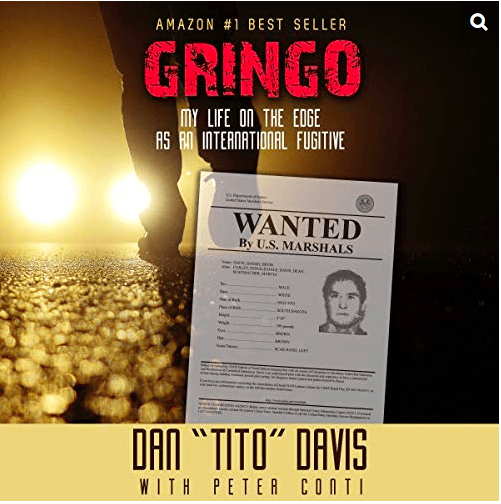 Why did you decide to do an audiobook for Gringo: My Life on the Edge as an International Fugitive?

The main reason that we decided to do the audiobook was that there is a market out there with a lot of people who enjoy books, but the problem they have is they do not have the time to sit down and read them physically.  They only have time to listen to audiobooks, for example, while they’re driving in their cars, while they’re sitting out there watching their kids during soccer practice. These people have to multitask, they’re extremely occupied, we wanted to give those people the opportunity to experience Gringo and entertain them.

Was making the audiobook easier or harder than you thought it would be?

I have never done an audiobook.  I really had no idea what it entailed.  It took a lot longer than I thought it would, and it was an entirely different process than writing the book.  With the audiobook you’re mainly dealing with professional radio and TV personalities, you’re dealing with real people, rather than say word processors and eBook formatters. Writing a book especially in prison is not easy, and doing an e-book was definitely a challenge.  The audiobook is right up there, none of it’s easy.

But nothing compares to beating out a book on some antique typewriter that hardly has any ink in the ribbon because the ribbon has been inverted and rewound so many times. Writing it in the windowless gray basement of some federal prison library, trying to type legibly on the paper you found in the trash.  Then most of the typewriters don’t work, that was the most difficult of all – hands down no competition. I am glad that most writers don’t have that experience.

I believe the audiobook is going to be strikingly entertaining and keep the listener on the edge of their seat or steering wheel!!

When you listened to the audiobook when it was complete did it strike an emotional cord or two?

It was the first time that I actually listen to my book being read by someone else. A few of my friends told me that they have their wives read a chapter or two of my book to them, every night before they went to bed.   That was another reason that we decided to do an audiobook.

It definitely a struck my emotions, it made me see and think about how stupid I was!  How fortunate I was in many of the situations I put myself in because of my bad decisions. This is especially true since I did not follow my checklist of the things that I must do in order never to be apprehended as a fugitive.

My biggest problem and mistake was making emotional decisions. Also, not listening to my gut instinct, which is what, sunk me. It is also why I was eventually kidnapped from Venezuela, when they had no extradition agreement.  That was just too good to be true. If I had known they had a $2 million bounty on me, I wouldn’t have been sitting there thinking that some non-extradition clause would protect me.

I just found out a few weeks ago, from a British attorney, who called me after he met with the former head of the Venezuelan secret police.  They paid $2 million US to the mercenaries for my kidnapping. I guess after missing me in Mexico, Costa Rica and Belize, then losing my trail for over a decade they decided they weren’t going to blow this opportunity. I’m one of the very few Americans ever renditioned that wasn’t a terrorist suspect.

While listening to your story, what is your favorite part?

The entire book is non-stop entertainment for the listener. But the Columbian chapters, taking readers through my time living with the Medellin Cartel in Columbia, when there was no extradition in place – that is a league of its own.

It is total action!!  There’s always something on the edge happening, including my hit woman Spanish teacher, kidnappings, assassinations, funerals, and life in overdrive in the fast lane.   In those chapters, there is no time to catch your breath, and in my opinion at that point no one is going to think about shutting the audiobook down!

What is next for you?

After the launch of the audiobook, I am going to concentrate on promoting and acquiring the proper mini-series or major motion picture deal for my book Gringo: My Life on the Edge as an International Fugitive.  Almost everything has been done that can be done as far as books are concerned, Gringo has had a phenomenal success thanks to all of the readers, listeners, critics, reviewers, fans and people that have supported me and my book. I would like to thank all of you so much for all of your support.   Without you, it would never have been possible to reach the height that we have. Thanks again for your great support and help!

Michaël Bijker On Yoga, Breath Work and the Mind-Body Connection