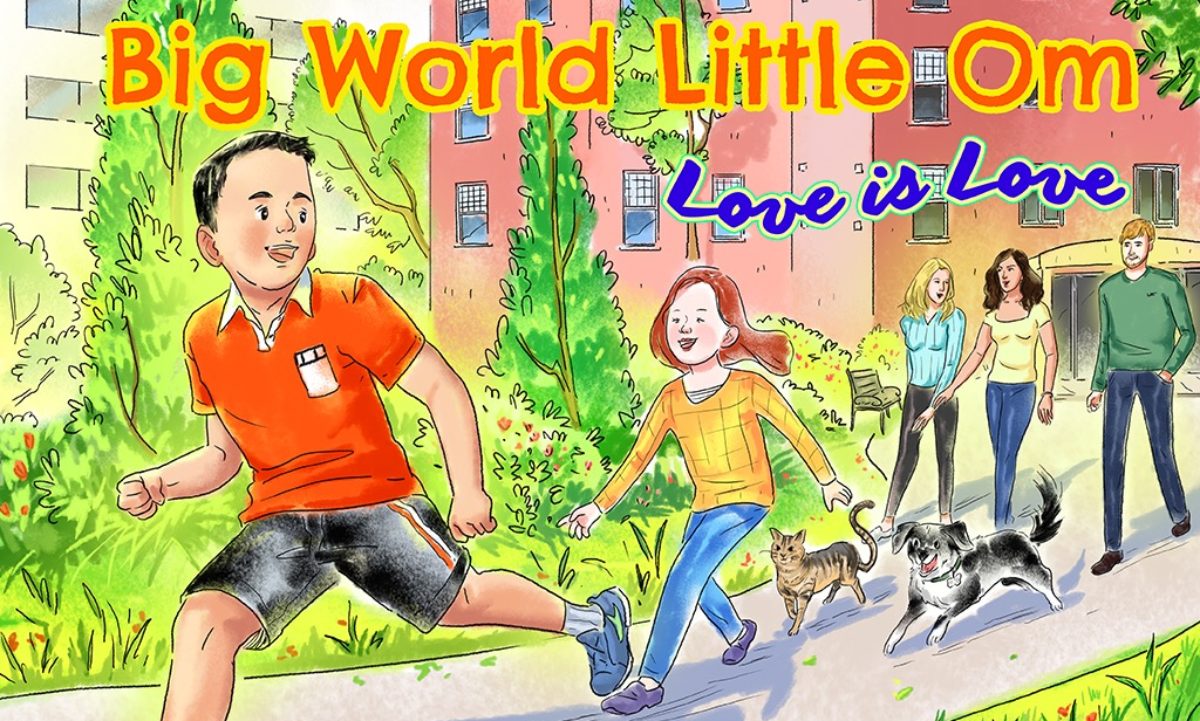 Everyone is different and everyone’s families are different. That’s important because the world needs all kinds of people and all kinds of love. After all, love is love! If we can accept what makes us special we can live more free lives, rather than follow the status quo of false images the current media floods us with everyday. Big World, Little Om is a project that celebrates diversity by teaching children about understanding and compassion. Characters experience real world situations such as facing gender identity questions, having two moms or dads, parental separation and more.

MERA: Big World, Little Om aims to eliminate the illusion that there is a “normal” by introducing to children the reality that everyone and everything is actually diverse.  The Kickstarter campaign will allow us to reach a multitude of media platforms. Just as Hollywood floods the market with messages that yelling, jealousy, manipulating, and angry people winning is normal, we are going to flood the media with messages that people are diverse, that muscle doesn’t equate to strength nor violence to power and that humanity has come so far, evolutionary, through the sharing of knowledge and caring for each other.  We need those messages to continue in order to keep balance and that’s the goal of Big World, Little Om and Kickstarter will help to get that message out to the world.

MERA: The name “Om” resonates with people because it represents a sound associated with mindfulness.  Om, the character, is a very mindful boy. He’s aware of what is happening, struggles in the way that everybody does, but doesn’t “react” in the way that most characters do in books and on T.V.  Instead, he acts the way that people who have practiced mindfulness for over 2,400 years have – only in the way that a child would be able to do that. He uses his imagination to confront issues rather than run from them, he uses kindness and compassion to diffuse tension and awaken understanding in others.  He does this not knowing, of course, that he’s doing this. Just as the sound, “om” is used to teach students to meditate, to concentrate on a single sound, the character, “Om” will teach children to concentrate on compassion and understanding.

BREAKAWAY DAILY: Why was important to you to create this children’s book series that highlights family diversity?

MERA: I see so many people struggle with identity issues in this culture.  Not all cultures have this challenge, but we do and many people who I care deeply about struggle with accepting who they are and standing strong in a sea of media images that don’t reflect the reality that we all live in.  Children grow up scared to show any feelings that they have that are outside of what is shown to be “mainstream” in the media that they’re exposed to and research has shown that that fear develops into personality disorders, anxiety and depression.  This series highlights family diversity because that’s the reality that we live in and we don’t need to fight it, argue over it or try to change it when we can just accept it and live more comfortable, cooperative lives.

BREAKAWAY DAILY: What will the books be about / focus on? A specific character, setting, story?

MERA: The first book, “Om the Enchanted” is about Om, the changes in his family structure and what it means to have a true friend.  It’s about using our imaginations to cope instead of escape, being understanding and accepting each not because it’s the politically correct thing to do but because we have an actual understanding that we’re each as unique as each snowflake that forms, falls and makes the beautiful snow.  A single snowflake does no good – nor a single drop of water – nor a single human being – we are all better together and need the diversity in order to actually get anything done and have an impact. I’m not a radio personality so I need you to help me. You’re not an author so you need writers to come up with stories that you can relate to and we all need, musicians, doctors and each other to make this world work.  That’s what the stories will focus on – the reality of diversity and how Om uses courage to spread understanding and love.

BREAKAWAY DAILY: Why do you think teaching children about diversity, understanding and compassion is so vital right now?

MERA: Children are flooded with false images of masculinity and femininity.  They connect with characters who live in the illusion that money is power, brute strength always wins and the most manipulative woman is also the most attractive.  These are all qualities that research has proven, and that we know in our hearts, create harm. We don’t need such illusions to have dramatic, exciting stories – we’ve simply lost ourselves in the illusion that this is “normal”.  If we can raise a generation that learns to cooperate instead of compete, care instead of manipulate, then that generation will be able to work together to fix our mistakes – to reduce global warming, pollution, genocide and so many other things that humans create because of the delusions that persist.  Now is exactly the time because, just as kids are fed and speaking out about gun violence, they’re also fed up with messages of hate, greed and violence.  They’re hungry to learn ways to communicate, to work together and to make the changes that will, literally, save humanity from itself.

BREAKAWAY DAILY: Do you find there is more and more books or ways to show children about diversity now after it has appeared as a serious issue, or were you shocked that the market is still quite under saturated?

MERA: I’m aware that the market is under saturated with messages of cooperation and compassion.  They appear in pre-school texts and then the messages change in books, movies and T.V. shows for kids six and older.  So, we begin by teaching kids to share and care and then suddenly change the message and tell them to be physically strong, mentally manipulative and use anger and violence as a “voice” and a way to accomplish your goals.  It’s very confusing and devastating to the psyche. Researchers have found that cultures that don’t espouse such beliefs have lower levels of suicide, depression and anxiety. We’re going to expose children to those belief systems through this project and do our best to saturate the market with what we already learned in pre-school.  This is not so much a “serious” issue as it is an accidental misunderstanding of reality. We simply aim to restore our view of reality by reinforcing what pre-schools around the world are already teaching. By creating that continuity of messaging, we can help the next generations to feel less confused, more grounded and more capable of clear, honest and helpful communication.

Read about Mera’s story on her about page.