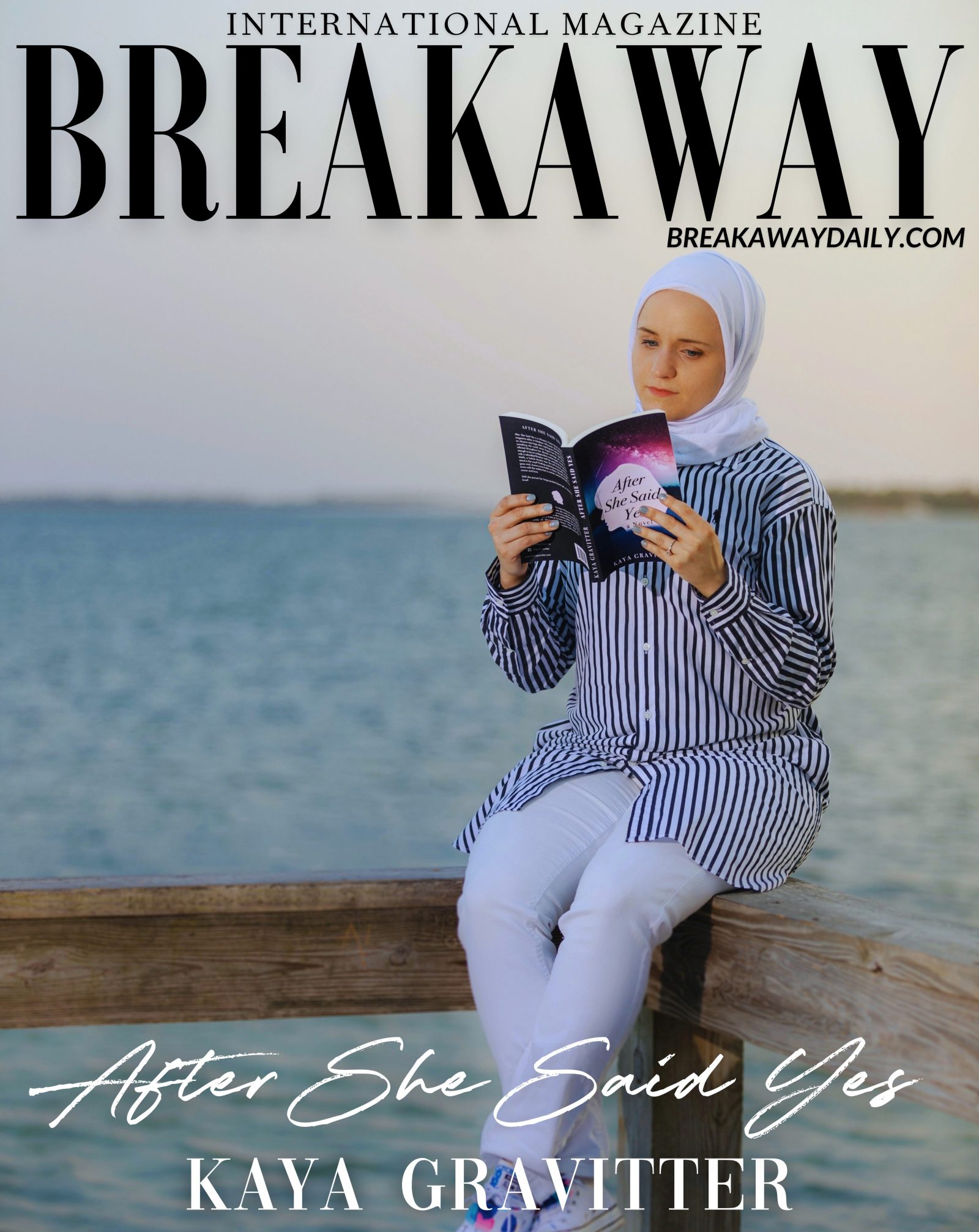 In her debut novel, After She Said Yes, Kaya Gravitter makes a social commentary about the issue of domestic violence. The feminist fiction draws parallels between Aurora, the main character, and what Kaya has faced in her own life as a survivor of domestic abuse. Her trauma and passion for writing led her to pen this poignant story in order to give solace to women left grappling with the consequences on their mental health. Kaya hopes her words help women speaking out against their abusers and for those who still haven’t by giving a voice to the voiceless.

“A woman’s growth through challenges.”

After She Said Yes centers around Aurora, a magazine editor in Madison, Wisconsin. Aurora must decide whether to stay in an increasingly toxic marriage to her husband Gannon or escape, which is ripe with its own perils. She eventually finds her way out of the marriage after catching her husband doing something she could never forgive him for. Battling the wounds inflicted throughout her abusive marriage, she strives to find the strength to be an independent woman again. The novel is an example to women that it is possible to heal from this heinous crime and not just live, but thrive.

What led you to write this novel and to speak to the issue of domestic violence?

The novel was originally supposed to be just a love story. I then realized I wanted to write something that would really impact and help others. I was also inspired by the Me Too Movement. The thing is, the beginning is the only part that mentions abuse. As the story progresses, you grow and heal with Aurora. I wanted to explore a woman’s growth through challenges and how she gains inner strength. The book sheds light on what life is like after Aurora has left her abuser and her growth after leaving. Aurora eventually learned to love and put herself first. I hope the book offers women a way to heal or the strength to leave. I have been told by survivors that my book has done both.

Your novel hits close to home for you as a survivor of domestic violence (that can physical or psychological.) How close are some of the situations in the book to what you experienced?

I do not want to trigger anyone; I can just say that many of the things I talk about regarding abuse in the book are from my real life. In the beginning of the novel, there is a scene that is close to what happened to me. I was in an abusive relationship and it took me getting cheated on to leave.

Why is it so vital for women to tell someone about what is happening to them?

I was able to leave after telling my family and some of my friends. That way you are no longer alone and there is someone to hold you accountable.

How did you come up with the plot and the characters?

It just kind of came to me. Through the characters, I wanted to show that a woman does not need a man to be successful. At the same time, if a women can have both love and success, that is powerful too.

Muslim women are often silenced by their own communities or face Islamophobic stereotypes from outside agencies when they try to seek help. As a Muslim convert, did you experience this?

Unfortunately, this is true. Some of my Muslim friends would not help me and turned me away when I came asking for help. It was already hard enough to open up to them.

What are the main reasons why a woman, especially a Muslim woman, may not seek help if she is being abused?

I feel Muslim women keep silent for reasons that any woman would. One could be that they would never get married again, because society (especially Muslims) do not favor divorce. Society also does not talk about domestic violence because it is a uncomfortable subject.

Muslim men are often stereotyped as abusive and oppressive to their women. Do you think your book helps destigmatize that stereotype?

I am not sure if it helps, but I hope so. What pushed me to incorporate a Muslim man coming to the rescue, so to speak, is because I have personally seen it happen before.

Was there any particular reason you chose to make the protagonist non-muslim?

I did this to make the story relatable to more people. Also, since I am a convert to Islam, I could write from the perspective of a Muslim or non-Muslim. Aurora is financially independent, so I wanted to show that domestic violence can happen to anyone from any background regardless of age, socioeconomic status, sexual orientation, gender, race, religion or nationality.

I feel you should treat the survivor of domestic abuse in a sensitive way. Don’t make them feel uncomfortable. Don’t ask them why they didn’t leave. Don’t ask anything. Just be there for them, for when they are ready to open up.

When I lived in Madison, Wisconsin I volunteered at Domestic Abuse Intervention Services (DAIS) amongst other women’s shelters. I have always been involved in helping at shelters since I was young. I wanted to write this for all of those women I spent time with and tried to help from when I started volunteering at fourteen years old.

Beside the trauma and emotional scars you have had to endure, what are some of the mental health issues you were left with as a result of your abuse?

What advice do you have for other women who might be experiencing domestic violence?

No matter what you think nothing is your fault. No one deserves to be abused. You are stronger than you think. Women can do anything.

Kaya Gravitter holds a double major in Political Science and International Studies from the University of Wisconsin. She recently published her second book, Fragments of the Heart filled with poetry that she has written throughout her life that focuses on the power of love. Through her book and activism, she hopes to help create a more inclusive world. For more information on Kaya visit her official website.

Please support independent authors by purchasing a copy of After She Said Yes, available from Amazon and all major book retailers.

This particular article leaves me in tears. It brings back so many memories of my childhood of why my mother never chose to leave such an abusive marriage after so long 🥺. The article states how she wanted to explore a woman’s growth through challenges and how she can she gain inner strength. “I feel, as she states, you should treat the survivor of domestic violence abuse in a sensitive way. Don’t make them feel uncomfortable, Don’t ask them why they didn’t leave, just be there for them when they are ready to open up “. After losing my mother… Read more »

Thank you sincerely for sharing your story. Brings us to tears as well how deeply this touched you and how it provided you another perspective of what your mother (and you) went through. So sorry for your loss 🙏 You are a very strong woman yourself! You too are a survivor and should be very proud. All we can do on this journey is learn from our past, continue to grow and move forward. Kaya’s book and experience will no doubt resonate with many people still battling DV and wearing the aftermath scars. So many of us have been impacted by… Read more »

This was so inspirational for so many women for today, and for future women to come🙏🙏

Thank you for sharing.

Thank you! Truly touched me and I truly appreciate you sharing your story ❤ 🙏

Aurora, the main character in “After She Said Yes,” eventually learned to love and put herself first. Domestic violence victims rarely put themselves first; their self-esteem is literally destroyed. Author, Gravitter provides victims a “voice to the voiceless.” She also offers great advice on how we should treat survivors. I especially appreciate Breakaway Daily mentioning the importance of cultural relevancy when counseling domestic violence victims. “Domestic violence affects all people regardless of age, socioeconomic status, sexual orientation, gender, race, religion, or nationality.” We can provide support in numerous ways, such as recommending this book and cover story. I have already forwarded this… Read more »