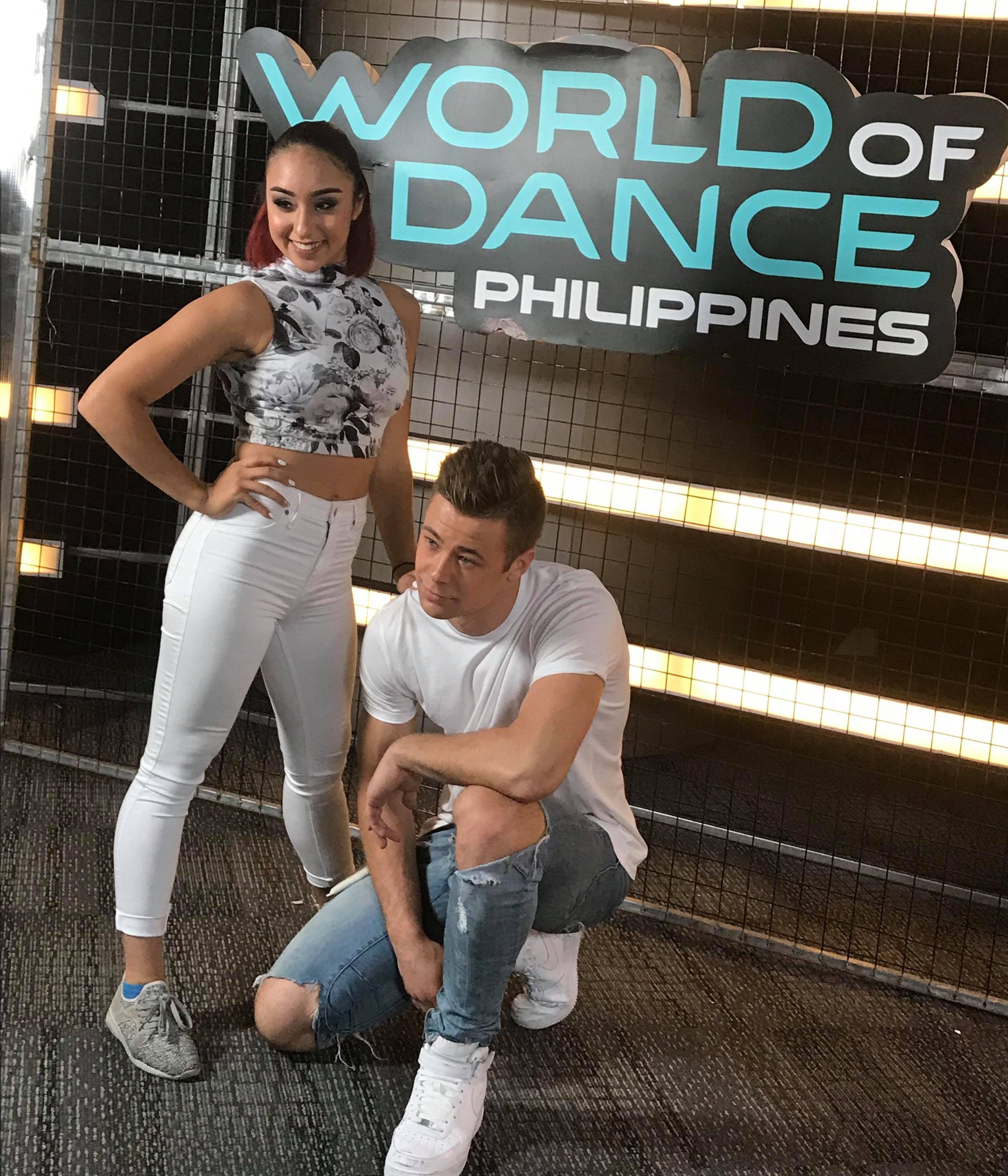 “To be half Filipino, I’m representing my family,” replied Jenalyn. “It’s such an honor to be here honestly. I’m so happy to be here to share my talent.”

The duo’s first routine on the premiere season of World of Dance Philippines effortlessly blended their signature dance style of acrobatics and ballroom together. Judge Gary Valenciano gushed about how much heart their performance held: “That’s what made it world class,” he told the them. This first performance in the Philippines received a 95.3 and would set them on their journey to the live grand finale.

World of Dance Philippines is hosted by Miss Universe 2015 Pia Wurtzbach, co-hosted by Lucky Manzano and featuring a panel of extraordinary superstars including Billy Crawford, Gary Valenciano and Maja Salvador. The grand finale (which aired April 7th) was an historic event. Not only did it mark the first live finale of the World of Dance TV series ever televised, it also allowed worldwide viewers to support their favorite act by becoming the fourth judge and ultimately deciding the finalists’ fate in the competition. A huge hit in Asia, the finale was trending on Twitter as the show enlisted multiple trending topics including the finalists’ names and the show’s official hashtags #WODOHWorldFinals and #WODPHChampion.

During the entire competition the finalists all supported each other on and off the stage. Fierce competitors on the dance floor, but best friends off. “Kapamilya,” meaning family, was the mantra for the entire show by the dancers, crew and production team. Family was also the theme that ran through Luka & Jenaly’s journey on World of Dance Philippines.

Having competed in the first two seasons of NBCS’s World of Dance in the United States, Luka & Jenalyn are no stranger to the series. However, the location for the Filipino version of the show is one that would hit close to home, especially for Jenalyn and her family. The decision to make the fifteen hour flight to the Philippines over the course of five months was an easy one due to Jenalyn being Filipino and her ties to the country. It is her mother Myra’s homeland. It became a way for her family to strengthen the ties to their roots, culture and heritage.

It doesn’t matter whether your Filipino/Puerto Rican (Gary Valenciano), Filipino/German (Pia Wurtzbach), Filipino/American (Billy Crawford) or pure Filipina (Maja Salvador). Being Filipino is more than being born in Philippines, it’s about carrying the Filipino spirit. World of Dance is the biggest dance show in the world that shows the best of the best dancers, no matter the background or culture.

Each week in the Philippines, Luka & Jenalyn stepped up their game to compete against the enormous talent on the show. They wowed everyone with their emotional dance routines that included “Ain’t No Sunshine When She’s Gone” by Bill Withers, “Love Someone” by Lukas Graham and “Unsteady” by X Ambassadors (that we were behind the scenes for last year when they worked with mentors Les Twins and Aidan Carberry). Their divisional final win for “Natural” by Imagine Dragons was a chilling performance that brought all judges to their feet, propelling them to the final stage of the competition.

“The process to create Natural was all about taking what we have and bringing it to new levels,” says choreographer Aidan Carberry. “We focused on fitting more into the dance then any other we’ve done before. Also adding elements that were more aggressive to tell a different story.”

The competition was high as the top three acts competed in the finals. Ken San Jose (Junior Division), FCPC Baliktanaw (Team Division), and Luka & Jenalyn (Upper Division) fought for a chance to win two million Philippine pesos (equivalent to fifty-one thousand dollars Canadian), an all-expense paid trip to Los Angeles, and become the country’s representative in NBC’s World of Dance. The grand dance battle heightened the excitement of viewers as the three finalists from each division pulled out all the stops to showcase their immense dance versatility in the much anticipated “World Finals” of World of Dance Philippines.

During the finals, Luka & Jenalyn proved that they are Pinoy at heart and brought pride to the country with their emotional and effortless performances. For night one of the finals they performed a heartfelt dance to “Akin Ka Na Lang” by Morissette Amon. The beautiful Filipino song was chosen by judge Gary Valenciano, who said the duo “took the heart of the Pinoys” with their performance. They received an average score of 94.67.

“I didn’t think you would take it to this level higher than what you’ve done before but it looks like you did it again and you took the heart of the Pinoy to the Pinoys by doing this song,” Valenciano announced to the duo after their performance.

Judge Maja Salvador said: “Your performances are always breathtaking.” She further added, “You never fail to amaze us.”

Billy Crawford praised the duo for their connection.

For the final night, Luka & Jenalyn once again pushed themselves to the limit, giving it all they had in their dream of winning the championship. Performing live, the duo left it all on the dance floor as they performed an eloquent routine to Lady Gaga and Bradley Cooper’s “Shallow” from the film A Star Is Born. They received a standing ovation and a perfect score from the judges. Billy Crawford called the performance their “best” yet, while Gary Valenciano said that they have raised the bar high in the competition.

“Both of you have served as an inspiration to so many people watching,” spoke Valenciano. “They all want to beat you. They all put you as the standard that they should come up to in order to make it this far.”

Hip-hop group FCPC Baliktanaw were crowned the first-ever World of Dance Philippines grand champion. Known for their routines with Filipino flavor, the group performed to “Man From Manila” by the late rapper Francis M. The team accumulated a total combined score of 99.05%. They took home the grand prize of P2 million pesos and an all-expense paid trip to Los Angeles where they will represent the Philippines in the qualifiers round of NBC World of Dance.

“I only have one thing to say: you are exceptional,” said Billy Crawford.

Luka & Jenalyn earned the 1st runner up position, receiving an average score of 96.38 points with the combined audience vote. Although Luka & Jenalyn didn’t win the title, they won the hearts of Filipinos everywhere.

“Competing in World of Dance Philippines has meant so much to both of us,” Jenalyn tells Breakaway Daily. “The countless hours, the sleepless nights, and the hard work put in every day spend working on our craft. It has all been worth it.”

Jenalyn goes on to express the enormous gratitude she feels for the show, not only giving her and Luka a platform to showcase their talent, but a way to connect with her ancestry.

“This show has given me an opportunity to make my dreams come true by reuniting my family that has been separated for almost half a century,” Jenalyn says. “My venture to World of Dance Philippines has given my mother and grandparents the opportunity to come back to their home country for the first time in years. With that we have been able to reconnect with out roots, culture, and family members.”